A few things have popped up in the sports news lately and they have hit my hot button!

As a media person as well as a former professional athlete, I am blessed to have a unique advantage in some of the “shenanigans” that go on in sports. The much-ado-about-nothing story that slightly deflated footballs were used in the AFC Championship Game game is an example of the people responsible for airing this coverage on TV and writing about it failing to do sufficient homework.

I tried to approach my job as a broadcaster the same as I did when I was a player. Be prepared. Do the homework and research necessary to be accurate, honest and objective. Unless you have been living under a rock and not paying attention to what goes on behind the scenes in sports, you have missed the fact that teams in all sports — both professional and amateur — always have tried to get an edge over the opponent.

Although I made my living in baseball as a player, I did do some volunteer work in professional football in the baseball offseason. In the 1960s, I worked the sidelines at Minnesota Vikings games, helping my friend, Jimmy Weisner, the equipment manager for the visiting teams. I tossed parkas over the players coming off the field. I have wrapped a parka around Bart Starr, Gale Sayers, Ray Nitschke, Paul Hornung and Johnny Unitas. In my snowmobile suit and ski mask, they had no idea I also was a player at their level in a different sport. I had access to the locker room and I heard all the conversations about their sport.

So, let me tell you that “doctoring” footballs to suit your quarterback, receivers and kickers has gone on for decades. I know of teams that used to take four footballs at a time, put them in plastic garbage bags and have someone repeatedly slam the bag against a wall to soften up the balls. Then they would wash them, put them in the dryer to dry, and put them in the box for the officials in order to appear brand new, even though they had been broken in a bit.

I give you all this background information to point out that if today’s media would do their research, they would find out this stuff has been going on for a long time. And, by the way, I was rooting for the Packers to get to the Super Bowl, so I am not writing this to support Bill Belichick and Tom Brady, though I have great respect for both of them. I wish the media would look for the value in pursuing the life of Brandon Bostick. He is the player who fumbled the onside kick that enabled Seattle to recover it and eventually win the game in overtime. His attitude and accountability are life lessons for every young athlete on how to handle a crisis.

Final thought on this: Wouldn’t it solve this issue if the league just put 24 footballs in the hands of the officials on game day, with the same specs for both teams?

The big media buzz over the deflated footballs brought back memories of things baseball teams did to gain an edge. I broke into the majors with the Senators in the middle of the 1959 season at 20 years of age. My first game was against the Chicago White Sox, the eventual AL pennant winners that year. They were known for speed and bunting. Our third baseman that day was Harmon Killebrew. He would become my friend and was a teammate for the next 15 years. Harm told me that if a bunt rolled down the third baseline, don’t expect it to roll foul like most would in other parks. Fields were crowned for drainage in those days and slow rollers down the line tended to roll into foul territory. The White Sox slanted their foul lines toward fair territory so bunts would stay fair and become hits.

Both Harmon and the White Sox habit of  “customizing” things to their advantage surfaced again in the mid-1960s. After hitting a long fly to left that resulted in a long out, Harm sat next to me in the dugout and said, “I crushed that ball. I can’t believe it didn’t go out.” In those days, they rolled the last out of the inning toward the mound, so being the pitcher that day, when I picked up the ball, it felt unusually cold for a summer day. Later we would find out the White Sox stored the baseballs in a cold room. They were singles hitters and we had home run hitters. The cold baseballs didn’t carry as well. The White Sox also were caught using a telescope in center field to look at opposing catchers’ signs, to be able to tip off their hitters on what pitch was coming. But it wasn’t just the White Sox. Most teams did something to gain an edge.

News this week of using a pitch clock to speed up games. It has been supported by our outgoing commissioner, Bud Selig. I wish there were a way for Bud to stand behind a pitcher during the game and see that it’s not pitch clock, but a batter clock.

During a postseason game a few years back, I decided to track the time hitters took up by stepping out of the box, adjusting their wrist bands, re-fastening their gloves and looking at the third base coach for a sign with a full count and the bases loaded, when no sign would be necessary. Without going into the exact time details of what it took for a batter to get ready for the next pitch, I can tell you that if batters kept one foot in the box after each pitch and if some company could develop a batting glove that would fit snugly enough that it wouldn’t need re-fastening and also had a wristband attached to it, the game would be a minimum of 20 minutes faster. Speaking as a former pitcher who pitched many games in under two hours, I can assure you that even with increased commercial time, it is not pitchers who are causing longer games. It is managers trying to control too many things from the bench, making too many trips to the mound and batters who take too much time between pitchers. I have had a chance to meet our new commissioner, Rob Manfred, and I hope to get the opportunity to share my thoughts on the issue with him.

I close with a tribute to everyone’s friend in baseball, Ernie Banks. Ernie always made you feel like you were his closest friend. In 2009 while covering the All-Star Game for MLB Network, I walked into the lobby of our hotel in St. Louis and heard a pleasant voice calling my name. I looked at the person, and it was Ernie sitting in a lounge chair, mimicking holding a golf club in his hands. It was a reference to the fact we were both golf enthusiasts. I introduced him to my bride who was a former golf professional at the club level and asked Margie for a few tips on his setup and posture. So here is Margie giving Ernie “Bingo” Banks a golf lesson in the lobby of the Ritz Carlton Hotel in suburban St. Louis. What a great memory for both Margie and for me. No one could make you feel prouder to be a ballplayer than Ernie Banks. Thanks, Ernie, for all you did on the field and for the way you uplifted all of us with your spirit. 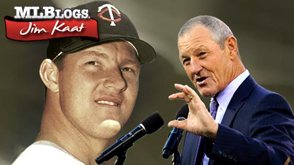